NYIT Hospitality Highlights promotes all the academic, professional, and cultural initiatives of the Department of Hospitality Studies and the School of Management Global Center for Hospitality Management. 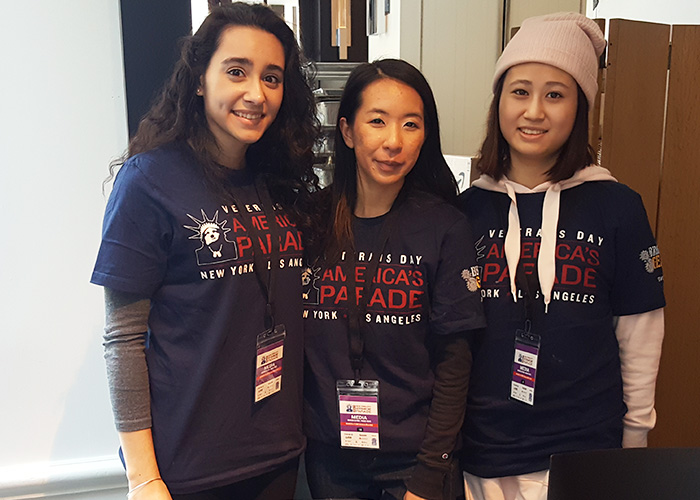 Back in 2016, I was a bystander at the Veteran’s Day Parade in midtown Manhattan. From then on, I decided to contribute my part in some way to show appreciation to those who have served and to those who are currently serving (including their families) the country I am now calling “home”.

This past January 2017, I was appointed as an advisor for the NYIT Chapter of Professional Convention Management Association (PCMA) where we educate students in all things related to event management. Coincidentally, an opportunity came up where a personal goal aligned with responsibilities as an advisor in finding unique educational initiatives for students to be a part of. The United War Veterans Council, producer of NYC Veterans Day Parade, expressed the need for volunteers at the upcoming 2017 parade. I had to make sure that our students were going to be a part of this major initiative.

Our chapter including student president, Ms. Amanda Mora and vice president, Ms. Peggy Chiang, took on the social media responsibilities in raising awareness for organizations serving our veterans’ needs on numerous social media platforms. We were given media access to document live coverage of marchers and spectators along the parade route on November 11, 2017.

The goal for our next initiative is to lead in the effort for NYIT to participate as marchers at 2018 Veteran’s Day Parade.

A Globetrotter Working in the Entertainment Capital of the World

NYIT Day at Yankee Stadium: Get Your Tickets